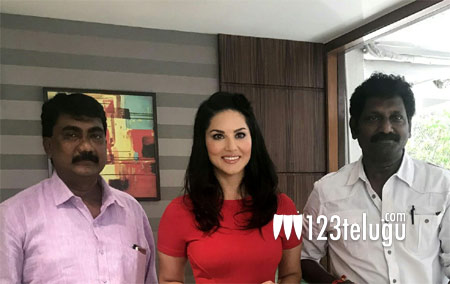 A very popular celebrity with a fame that spreads across the globe “Sunny Leone” has acted in many English movies earlier . While she has been constantly doing many Hindi Films, she has now signed her first direct Telugu movie as a heroine. V C Vadivudaiyan a popular Director of absolute commercial entertainers is going to direct this movie and Ponse Stephen is producing this movie on behalf of ‘Steeves corner’ as his maiden production.This untitled is not only going to be a big budgeted movie but also one based on the cultures of South India . Sunny leone has taken a very bold decision of her career by deciding not to take the glam route for which she is very familiar for.

For this untitled periodic war film she is all geared up to learn sword fight, horse ride and other stunt related arts. For this purpose a special trainer from Andhra Pradesh will fly to Mumbai and teach Sunny all these arts. Sunny Leone has given a call sheet of 150 days for this extravagant movie. Around 70 minutes of the movie is said to be C G driven so the companies that did the C G for ‘Baahubali’ and ‘2.0’ have been roped in for this movie. This movie is going to be released in Tamil, Telugu, Malayalam and Hindi and the title of this movie will be revealed soon.

Speaking about this movie, Sunny Leone says, “ After this movie I am sure my image will change completely. I have always liked doing action sequences. I was waiting for a script like this only for years. I started preparing for this movie from the minute director V C Vadivudayan narrated me the script. I have a special love towards south India so I am very happy to do a straight Telugu movie. I have a lot of my fans in South India, especially Andrapradesh, Tamilnadu and Kerala”

The shoot will start from February, the pre production and set work for the movie is happening on full swing.