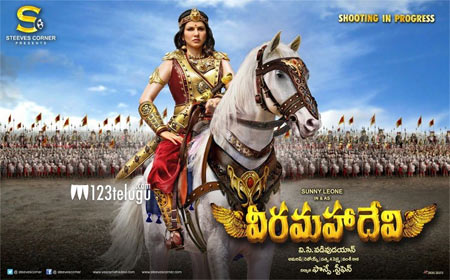 Bollywood actress Sunny Leone is currently working on her maiden Telugu-Tamil bilingual historical action film, Veeramadevi. The film’s first look poster, which was unveiled on the occasion of Sunny Leone’s birthday, showcased her in a warrior queen avatar.

And now, Veeramahadevi has landed in a major controversy in Karnataka. Several members of the Kannada Rakshana Vedike and a few Hindu right-wing groups are vehemently opposing a historical film being made with Sunny Leone. Protestors are demanding the makers to remove Sunny Leone from the film, even as the shooting is more than halfway through.

Veeramahadevi is being directed by VC Vadivudaiyan and produced under the Steevees Corner banner. The film is slated for release towards the end of this year.