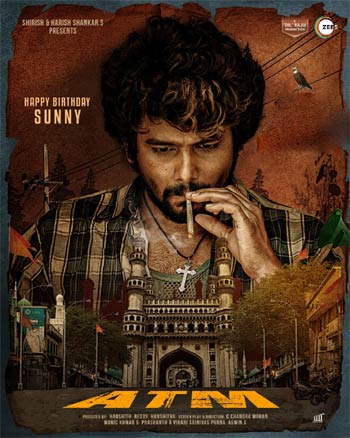 ZEE5 has been relentlessly dishing out a wide variety of content in various formats in all languages. It has made a name for itself nationwide as it is streaming ‘Roudram Ranam Rudhiram’ to a blockbuster response.

Marking the birthday of its lead actor VJ Sunny, the title winner of Bigg Boss Telugu season 5, a video glimpse introducing his character was released. As Jagan, his swag is superb. He is presented in a rugged mass avatar. He plays a 26-year-old man who gets booked in a case of robbery.

This Dil Raju production is presented by Shirish and Harish Shankar and produced by Harshith Reddy and Hanshitha in association with ZEE5. The series’ story is written by Harish Shankar and the series is directed by C Chandra Mohan.

‘ATM’ tells the story of four youngsters from the slums of Hyderabad. They are petty thieves who do thievery for subsistence. One day, they find themselves trapped in a huge robbery case and become the most-wanted accused for multiple elements in society. Their journey towards survival and redemption is what the series is about.