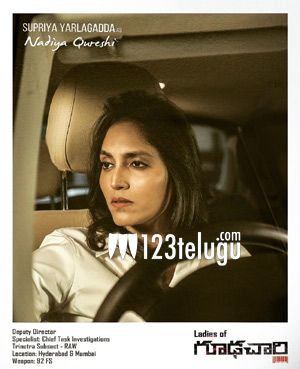 More than two decades after she played the lead role in Akkada Ammayi Ikkada Abbayi, which also marked Pawan Kalyan’s foray into acting, Supriya Yarlagadda is back on big screen. The producer, who has been the key force behind several films made under Annapurna Studios banner, will be seen in am important role in Goodachari.

Earlier today, the makers of Goodachari unveiled a poster revealing Supriya’s look from the film. As per the details shared by the team, Supriya plays Nadiya Qureshi, Deputy Director at RAW, the intelligence agency. Adivi Sesh, who has also written the script, is confident that Supriya’s role will make a huge splash in the film.

Directed by Sashi Kiran Tikka, Goodachari stars Adivi Sesh and Sobhita Dhulipala in lead roles. The film is slated for release on August 3.