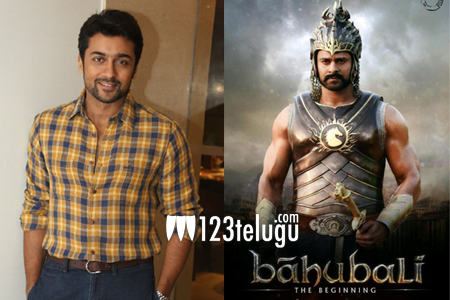 During Baahubali’s Tamil version’s audio launch in Chennai several months ago, Tamil star Suriya expressed his urge to act in Baahubali under Rajamouli’s direction. Since then, there have been several rumors doing the rounds which said that Suriya has been roped in for a crucial role in the film’s second part, Baahubali The Conclusion.

Now that the film’s shooting is about to be commenced and the rumors gathering steam once again, Suriya finally decided to open up about Baahubali 2. In his revelation to a national news daily, Suriya said that he has not been approached for Baahubali The Conclusion by the makers and that he is not part of the film at the moment.

Meanwhile, Baahubali The Conclusion is nearing its pre-production phase and the film’s regular shooting will commence in November.