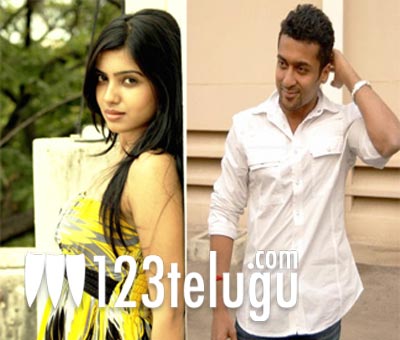 Samantha is a busy bee these days and despite back to back projects, she isn’t willing to let go any interesting project which falls into her lap. Recently, she opted out of Ram Charan’s upcoming film Yevadu but ended up signing Pawan Kalyan-Trivikram Srinivas’ film and NTR’s next film in Harish Shankar’s director. Meanwhile, in Tamil, she’s awaiting the release of Gautham Menon’s Neethane En Ponvasantham. Apart from this film, she had recently signed Lingusamy’s upcoming film. Suriya is going to play the lead role in this action entertainer and this is the first time that Samantha is teaming up with Suriya. The film is likely to go on floors in March 2013 after Suriya wraps up shooting for Singham 2. Although Samantha lost out Mani Ratnam and Shankar’s films in recent times, she’s making all the right moves to consolidate her position in Tamil as well. She’s currently shooting for Seethamma Vaakitlo Sirimalle Chettu and both Autonagar Surya and Jabardast are in final stages of completion. With so many interesting projects lined up for release in the next few months, it certainly looks like she has plenty of surprises in store for her fans.