Suriya Thanks Telugu Audience For A Special Sankranthi
Published on Jan 15, 2018 10:32 pm IST 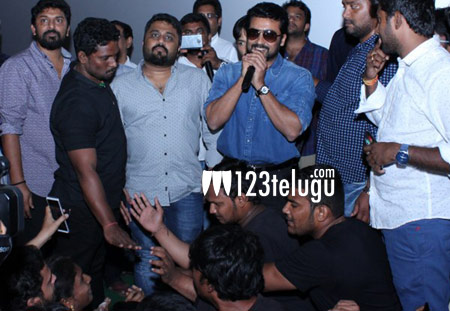 Suriya has been busy promoting his latest film Gang in several areas across Andhra Pradesh and Telangana for the past couple of days. After addressing the media in Hyderabad, the actor visited few theatres in Rajahmundry, Bhimavaram, Eluru, Vijayawada, and Ongole.

Speaking at one of the theatres, Suriya said, “I’m not with my family to celebrate Sankranthi; however, the love and affection that I have got from my brothers and sisters in AP and Telangana has made it a very special festival for me. I sincerely thank the Telugu audience for your warm reception.” The actor also thanked Vamsi-Pramod of UV Creations and Bunny Vas for releasing the film in Telugu.

Directed by Vignesh Shivan, the film has Suriya, Keerthy Suresh, and Ramakrishna in lead roles. Anirudh Ravichander has scored the music.