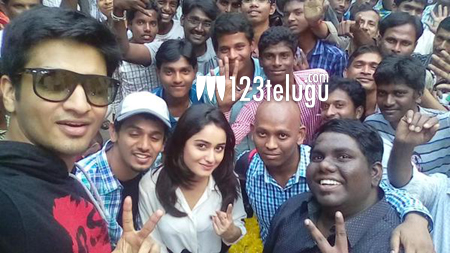 Young actor Nikhil is on cloud nine. With three hits in a row, the actor is mighty thrilled about being called a hat-trick hero, a feat very few stars of his generation could achieve. His latest release, ‘Surya Vs Surya’, has been running successfully despite mixed reviews and the Cricket World Cup. Trade circles have declared the film a hit as it has already grossed 7 crores and looks unstoppable at the ticket counters.

To celebrate this memorable success, the film’s team went on a success tour to Tirupati and interacted with the audiences. Nikhil thanked the audiences for making it a memorable milestone in his career and vowed to deliver more entertaining films in the future. The team then visited the Tirumala Tirupati Temple and tonsured their heads and offered special prayers to Lord Balaji.

Nikhil will continue the promotional tours for a few more weeks, before heading to New York to pursue a short filmmaking program.