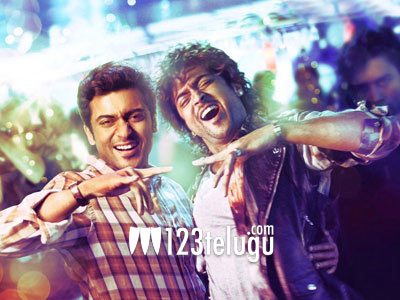 Surya’s upcoming film Maattrraan has got a new title in Telugu. After much deliberation, Bellamkonda Suresh, who’s producing the Telugu version, has decided to name it ‘Brothers’. The title is really apy for the film since Surya will be seen as conjoined twins. Director KV Anand has used performance capture technology to shoot Surya as conjoined wins. The film has Surya and Kajal in lead roles and is is being touted as a gripping action entertainer. It was shot in Chennai, Hyderabad and several Eastern European countries.

Buzz is that Kajal even speaks Russian in the film and it also has two Russian actresses in important roles. In another interesting development, Surya has come forward to dub his own voice for the film’s Telugu version. Over the years, Surya’s films have done considerably well in Andhra
Pradesh and his recent films have collected more than Rs 12-14 crores at box office in AP alone. Harris Jayaraj has composed the music. The film is expected to hit the screens on October 12 which is just a day after Pawan Kalyan’s Cameraman Ganga Tho Rambabu’s release. We’ll have to wait and see how many screens Brothers releases in AP and if it can manage to recover the investment since Bellamkonda Suresh paid a bomb for the film’s theatrical rights.