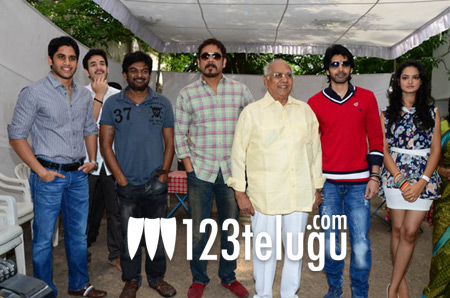 Sushanth, Shanvi starrer Adda was launched earlier today in Annapurna Studios, Hyderabad. Sai Karthik is directing the film and Nagasusheela, Chintalapudi Srinivasa Rao are jointly producing the film on Sri Nag Corporation banner. ANR, Nagarjuna, Amala, Puri Jagannadh, Naga Chaitanya, Akhil, Naga Susheela were some of the guests who attended the movie launch. Nagarjuna clapped the sound board, ANR switched on the camera and Puri Jagannadh directed the first shot. “I worked on this story for almost 1.5 years. We took the opinion of 70 critics before going ahead with the project. The film is an action love story and we are confident that it’s going to be a good film,” Sai Karthik said. Sushanth is making a comeback after almost two years and he stated that this is exactly the kind of story he was waiting for to make his comeback. Anup Rubens is going to compose the music.