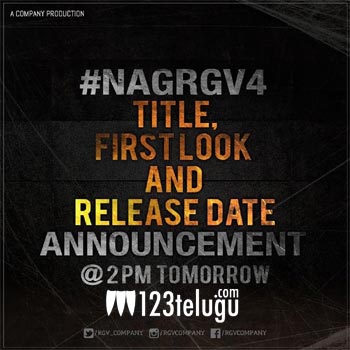 After a gap of nearly 2 decades, Nagarjuna and Ram Gopal Varma have joined forces for the fourth time. The duo that gave Shiva, Antham and Govinda Govinda, is currently working on a high-voltage action thriller. The film’s shooting is underway in Mumbai.

Ever since the film’s launch, there have been several speculations over its title. Finally, the suspense is going to end as the film’s title and first look and the release date will be revealed tomorrow at 2 PM. Debutant Myra Sareen is the female lead in the movie and R Company banner is bankrolling it. Stay tuned for more updates.