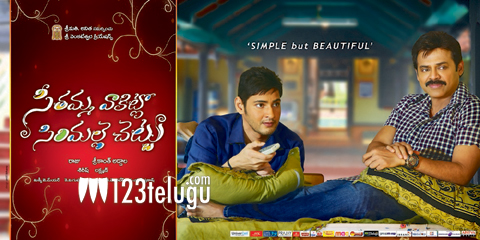 Venkatesh, Mahesh Babu starrer Seethamma Vaakitlo Sirimalle Chettu is set for it’s worldwide release on January 11. Srikanth Addala has directed the film and Dil Raju is the producer. The film’s censor was completed yesterday morning and it has been given a clean ‘U’ certificate. The preparations for the film’s release are in final stages and the overseas prints have been dispatched via Emirates Airlines. The film is going to be screened in more than 100 screens in US and Canada and it’s by far the biggest release ever for a Telugu film in North America.

Venkatesh, Mahesh Babu, Samantha and Anjali have played the lead roles in this family entertainer. Buzz surrounding the film is incredible and it’s the first time in almost two decades that a true multistarrer is being made in Telugu. Mickey J Meyer has scored the music and K V Guhan is the cinematographer.