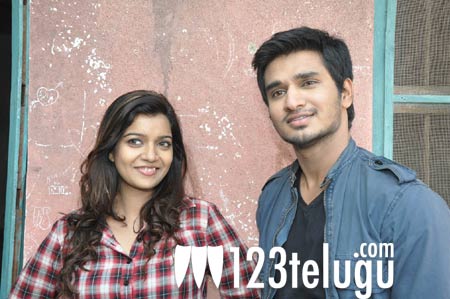 Nikhi and Swathi will soon be seen in a crime comedy film titled Swamy Ra Ra. Sudheer Varma is making his debut as a director with this film and Chakri Chigurupati is producing it. The film’s last schedule is currently going on in Hyderabad and some portions of the film will soon be shot in Kerala. The entire shooting will be wrapped up in December. Nikhil will be seen as a pick pocketer in the film and Ravi Babu is playing a crucial role. Pooja Ramachandran, who was last seen in Love Failure, is playing one of the lead roles in the film. Talking about the film’s progress, Nikhil said, “This is my 9th film as an actor and I strongly believe that it’ll do very well at box office. Sudheer Varma has great clarity in terms of what he’s doing.” Ravi Babu lauded Sudheer Varma’s efforts and said that he’ll make it big in the industry. Sunny is composing the music and Richard Prasad is handling the cinematography. The film is expected to hit the screens in January.