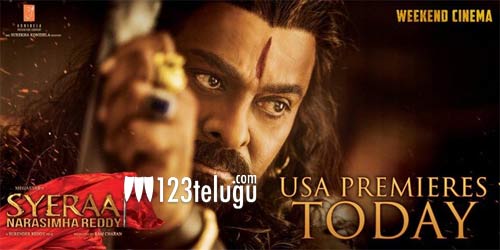 Sye Raa Narasimha Reddy, the highly-anticipated period drama is currently a hot cake among the trade circles. Along with domestic circuits, the film is expected to open big in the overseas too.

The film’s premiers will begin from 12 AM (IST) onwards. Meanwhile, according to the latest reports, Sye Raa is posting impressive numbers at the US box office. The film has already collected more than $516K from 229 locations until 9:15 am (PST) which is a massive number.

By looking at the present trend, Sye Raa has bright chances to collected 1 million through the premiers itself.