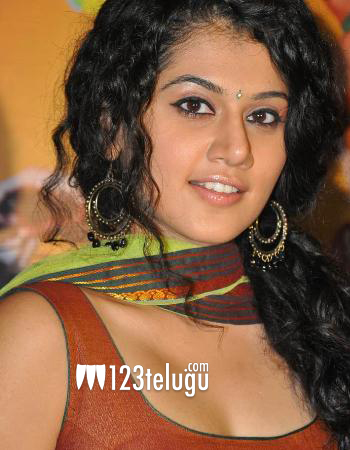 Taapsee Pannu is one of the busiest heroines down south and is now getting good offers in Bollywood too. She had a successful debut in Bollywood with ‘Chasme Bhadoor’ and was last seen in ‘Sahasam’ with Gopichand.

Taapsee is right now very excited and is quite eager for the release of her Tamil film ‘Arrambam’. Thala Ajith is the hero of this film and is going to get released in a big way tomorrow. There are sky high expectations on the project and fans are in jubilant mood for the release of the movie. Taapsee too had come down all the way from Dalhousie to take part in the release and to experience the mass frenzy surrounding the project. She has been aggressively promoting the film through her Twitter handle and has thanked the hero and director of the film.

Ajith, Nayantara, Taapsee and Arya are playing the lead roles in the film. Vishnu Vardhan is the director of the flick and Yuvan Shankar Raja has composed the music. A Raghu Ram is producing the movie.