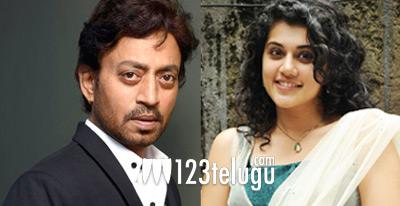 Talented actress Taapsee Pannu, who made her Bollywood debut with ‘Chashme Baddoor’, is busy signing Bollywood films one after the other. After signing Baby, Runningshaadi.com and Humara Bajaj, this beautiful actress has been roped in for a film titled ‘Sunderkhand’.

This film depicts the love story of two cops played by Taapsee and Irrfan. Produced by Shailesh Singh, this film will be directed by debutant Priya, who has early worked as a creative head for a television channel. According to Priya, this film is inspired from real life incidents. This love story will be shot in Uttar Pradesh and is slated to go on floors in October.