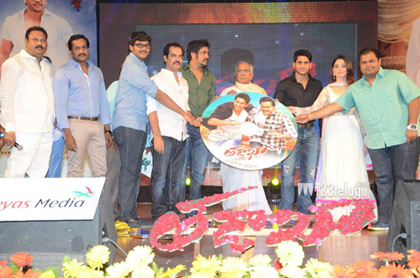 The audio of Naga Chaitanya, Tamannaah starrer Tadakha was launched in style in Shilpa Kala Vedika in Hyderabad. ANR and Nagarjuna were chief guests at the audio launch and Naga Chaitanya, Sunil, Tamannaah, Kishore, Bellamkonda Suresh, Brahmanadam were few other celebrities who were spotted at the event. Naga Chaitanya and Sunil are playing siblings in the film and Tamannaah, Andrea Jeremiah are the lead actresses. The film’s trailers and song teasers got a good response soon after their release and it looks like Naga Chaitanya and Tamannaah are set to recreate their onscreen chemistry once again after 100% Love. Producer Bellamkonda Suresh said that he’s quite confident of the film’s success and director Kishore, who had earlier made Koncham Ishtam Koncham Kashtam, praised the entire lead cast for giving fabulous performances. Arthur Wilson is the cameraman and Thaman has scored the music. The film will hit the screens later this summer.