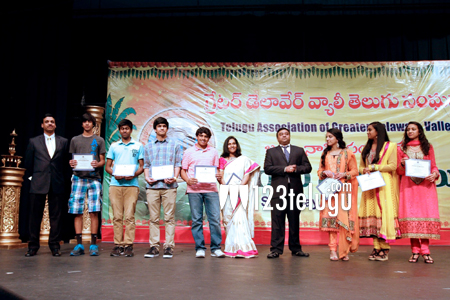 This thirteen hour event started at 10:00 AM with a welcome speech by Ravi Potluri, President of TAGDV followed by USA National Anthem. More than 110 participants enrolled and participated in cultural competitions and all the participants gave an amazing performance. Special thanks to the Cultural Committee- Ravi Potluri, Kiran Kothapalli, Anu Donthineni, Suresh Reddy , Mallik Budhavarapu and Bobby Yerra for their perfect execution. The program started by cultural committee by inviting chief guests and introducing MC’s of the program. President Ravi Potluri distributed prizes to the winners and recognized all the EC members. President Ravi Potluri delivered his message explaining the history and contributions of the elders over the past forty one years highlighting the services and contributions of TAGDV to the community. He thanked the current Executive Committee, previous Executive Committees, donors and volunteers for their contributions and tireless efforts to strengthen the Telugu Community in the region.

The presence of guest of honor Singer Sunitha was the highlight, her continuous three (3) hours non-stop performance along with singers Rajeev Nedunuri, Srikanth Sandugu & Sreenivas Josyula was well received by audience. Heroine Swathi entertained the audience with her lovely dialogues and enthusiasm involving the audience during the show.Hero Nikhil and Heroine Swathi gets good response for the small skit which involved several others from the audience. Telugu Vani, a special Ugadi Souvenir released by Heroine Swathi and designed by Mr. Srinivas Sagaram. Mr. Sreedhar Gudala worked hard to bring the souvenir. MC Sri Lakshmi did wonderful job. TAGDV executive committee members felicitated the guests.

TAGDV richly felicitated outgoing president Mr. Ravi Potluri for his services to the community & TAGDV. The audience gave him a truly rousing standing ovation. Program ended with a vote of thanks from Secretary Harinath Bungatavula followed by India National Anthem.