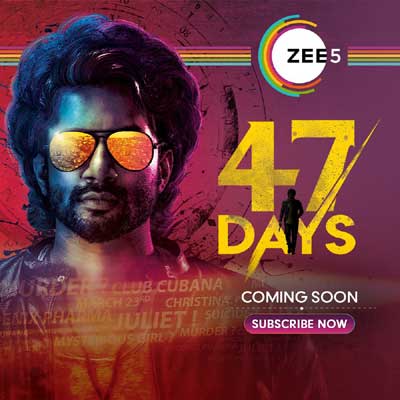 Satyadev is one of the most talented actors in Tollywood at the moment. In an interesting coincidence, two of his upcoming movies are going to skip the theatrical release and get a world premiere on OTT platforms.

We had earlier reported that Satyadev’s Umamaheswara Ugraroopasya will be releasing on Netflix. And the latest update is that his yet another movie, an intense thriller titled 47 Days, will be releasing directly on Zee5 app. The release date will be announced soon.

47 Days has young actress Pooja Jhaveri as the female lead. The film is directed by debutant Pradeep Maddali and produced by Dabbara Sashi, Kunche Raghu, Sridhar Makkuva and Vijay Donkada.