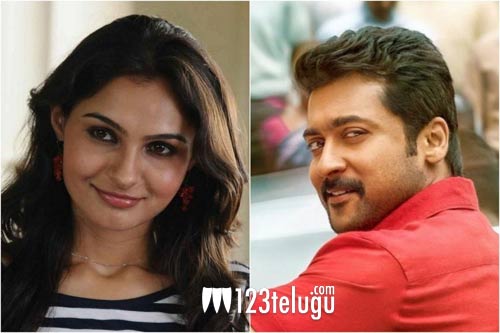 Hero Suriya will soon be joining hands with acclaimed Tamil filmmaker Vetrimaaran for a film titled Vaadi Vaasal. The shooting will commence in a couple of months and the pre-production formalities are underway in full swing. Senior Kollywood producer Kalaipuli S Thanu will be producing this intense drama.

Meanwhile, Kollywood circles are abuzz with speculations that talented actress Andrea Jeremiah will be playing Suriya’s love interest in the movie. Apparently, both Suriya and Andrea’s characters will have equal importance in the story. Suriya will be playing dual roles of father and son in in this period film which is based on Jallikattu.