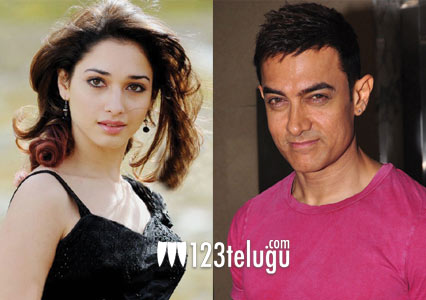 Tamannaah’s much awaited return to Hindi cinema last year didn’t go quite well; however, the actress has moved on from the debacle of Himmatwala. Soon, she signed two more films including Sajid Khan’s Humshakals and Sajid-Farhad’s It’s Entertainment.

Recently, while she was shooting for Humshakals in Mumbai, the film unit had a surprise guest on the sets. Aamir Khan, who was shooting nearby, landed on the sets of Humshakals and he reportedly spent quite a lot of time with the cast of the film. Buzz is that Tamannaah and another lead actress from the film, Bipasha Basu spent a lot of time chatting and cracking jokes with Aamir Khan. While Tamannaaah hasn’t spoken yet about the incident, it certainly looks like the actress is enjoying her stint in Bollywood.

This year, Tamannaah is busy shooting for S S Rajamouli’s Baahubali and Mahesh Babu’s Aagadu and the latter film is expected to hit the screens later this year.