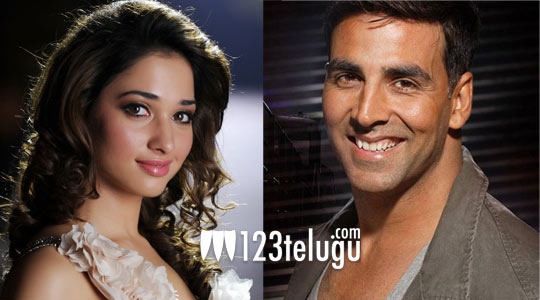 Tamannaah seems to have impressed quite a few people in Bollywood even before her upcoming film Himmatwala hits the screens. The latest buzz in Bollywood is that she is in talks to act in a film opposite Akshay Kumar. Sajid and Farhad will reportedly direct the film and Ramesh Taurani might produce the film under Tips Films banner. Akshay Kumar has agreed to do the remakes of A R Murugadoss’ Thuppaki, Ramana (Tagore in Telugu) and couple of other films which will go on floors soon. If Tamannaah joins the cast of this proposed project, her career will definitely get a big boost in Bollywood. In Himmatwala, she’s playing the romantic interest of Ajay Devgan. Incidentally, even Kajal Aggarwal followed a similar path in Bollywood. First she acted opposite Ajay Devgan in Singham and then went on to do Special 26 opposite Akshay Kumar.