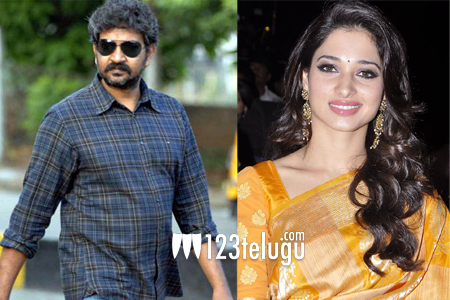 Tamannaah is one of the luckiest heroines in contemporary Telugu cinema. She has worked with nearly all the top actors, directors and this year is going to be bigger than ever before in her career. Apart from Aagadu, Tamannaah will soon be acting in S S Rajamouli’s Baahubali in which she’s paired up with Prabhas.

Although she hasn’t joined the sets of Baahubali yet, Tamannaah is all praises for Rajamouli. “S S Rajamouli always taps into the best aspects of his actors. What I really appreciate in him is the fact that he casts his actors not because they are popular. He casts them only if they fit the character and I’m thrilled that he believed that I fit in to his story,” Tamannaah said. She’s expected to begin shooting for the film later this summer.

Meanwhile, she’s currently shooting for Mahesh Babu’s Aagadu. Sreenu Vaitla is directing the film and the first look of the film is likely to be unveiled soon.