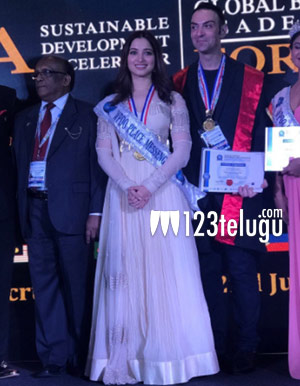 Gorgeous beauty Tamannaah now has a prefix to her name. The star actress has been conferred Honorary Doctorate by the Confederation of International Accreditation Commission (CIAC), an International non-governmental, private self-financed quality assurance rating and accrediting body. The event took place in Ahmedabad, Gujarat, last night. The actress is thrilled with the honor and said that she will strive to do justice to the doctorate.

On the work front, Tamannaah was part of the historic blockbuster, Baahubali 2, that released in summer. Tamannaah will have as many as four releases in the later half of 2017.