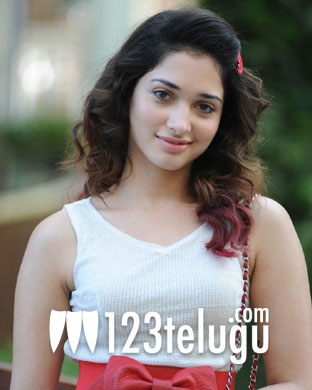 Tamannaah is the uncrowned queen of Tollywood when it comes to glamorous roles. She’s easily the best dancer among the contemporary actresses and she got rave reviews for her dance moves in films like Badrinath and Rachcha. Now, she’s gearing up for her upcoming Hindi film Himmatwala which will release at the end of March. Unlike Telugu or Tamil cinema, two things – kissing onscreen and wearing a bikini are quite common in Bollywood and every time a top actress has done those two things onscreen, it’s big news. So, when Tamannaah was asked, in a recent interview, if she’s open to do those two things onscreen like her colleagues, she simply said no.

“Whether it’s Bollywood or the South, I won’t wear a bikini or do any love making scenes either. As an individual, I’ve set certain boundaries for myself that I don’t cross and I’m not worried about the consequences that follow because of the decision I took,” Tamannaah added. She’ll soon be seen in the Telugu remake of Vettai and she has another untitled film with Ajith in Tamil to her credit.