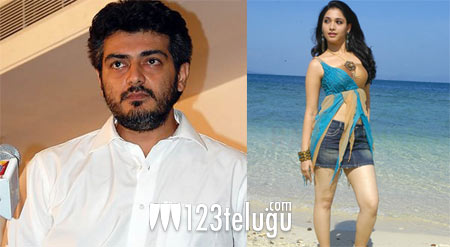 Tamannaah has finally signed a Tamil film after a long gap. She’s going to team up with Ajith in an untitled film to be directed by Shouryam Shiva. The film will go on floors in March and it’s expected to be a mass entertainer. It’s the first time Tamannaah is teaming up with Ajith. For the past few months, she had been telling the media that she’s waiting for a right project to maker her comeback in Tamil. At one point of time, she was the reinging queen of Kollywood before she decided to spend more time in Telugu films. Starting from 100% Love in mid 2011 to her recent film Cameraman Ganga Tho Rambabu, Tamannaah has had a hectic a year and a half in Telugu film industry. She’s currently shooting for the Hindi remake of Himmatwala which has Ajay Devgan in lead role and in Telugu, she has one film opposite Naga Chaitanya in the Telugu remake of Vettai. Her upcoming film with Ajith will definitely be a big comeback for her in Tamil considering how popular Ajith is and the hype surrounding the film is massive. Devi Sri Prasad is going to compose the music and Vetri is the cinematographer. Ventarama Reddy and Bharati Reddy are producing this film under Vijaya Productions banner