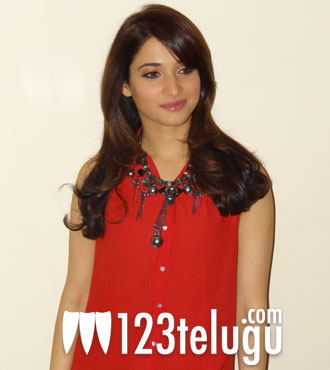 Tamannaah is back on the sets of Himmatwala, her upcoming Hindi film, after a brief gap. Ajay Devgan is playing the lead role in the film. The film’s shooting has been going on in Hyderabad for quite sometime and for the past few weeks Ajay Devgan had taken a break to promote his recent film Son of Sardar and Tamannaah was on a long break. Now that both of them are back on the film’s sets in Ramoji Film City, some key scenes are being shot on them. Sajid Khan is directing the film and Vashu Bhagnani is producing it.

The film is a remake of a superhit film of the same name which was made in early 80s by K Raghavendra Rao. The much hyped song ‘Nainon mein sapna’ is going to be remixed and interestingly, Kishore Kumar’s son, Amit Kumar has sung the remix version. This is going to be Tamannaah’s first real shot at Bollywood, although she had acted in a Hindi film before she made her Telugu debut. Sajid Khan is already quite impressed with her dedication and professionalism and he had even predicted that she’ll take the audience by storm in future. Himmatwala is going to release in 2013.