Tamannaah’s That Is Mahalakshmi to release without director’s credit?
Published on Feb 3, 2019 9:16 am IST 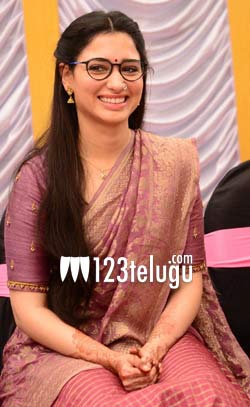 Following the ‘credit’ controversy around Manikarnika, all eyes are on Tamannaah’s That Is Mahalakshmi. The film is directed by two filmmakers – Neelakantha and Prasanth Varma, after Neelakantha quit the project due to creative differences with Tamannaah.

And, if the latest reports are anything to go by, That Is Mahalakshmi may hit screens without the names of both the directors mentioned in the credits. Already, all the film’s posters and the teaser that were released so far didn’t have the directors’ names, and the makers may as well follow the same strategy for the movie.

That Is Mahalakshmi is an official remake of the super hit Bollywood film, Queen. Manu Kumaran is bankrolling all the four South Indian remakes of Queen in association with Kannada actress Parul Yadav.