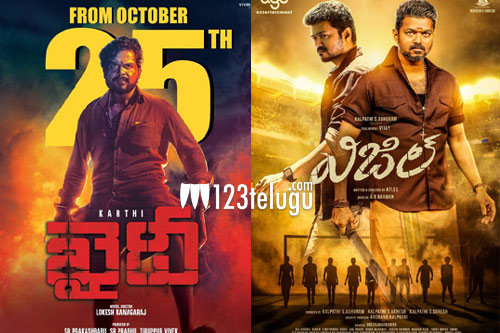 It looks like with no major releases planned for the Diwali season in Telugu, the Tamil films Bigil (Whistle in Telugu) and Kaithi (Khaidi in Telugu) are going to have quite a run provided the films are reasonably good.

Khaidi and Whistle release on October 25. October18 sees the release of four Telugu films, Raju Gaari Gadhi 3, Operation Gold Fish, Krishna Rao Supermarket and Malli Malli Chusa which do not have the kind of buzz that the two Tamil films do.

Vijay Deverakonda’s Meeku Mathrame Chepta and Ravi Babu’s Aviri are scheduled for a November 1 release and the Tamil film’s deal will be sealed within that time. It has been a while that Tamil dubbed films got such a big date without any major competition at the box office.