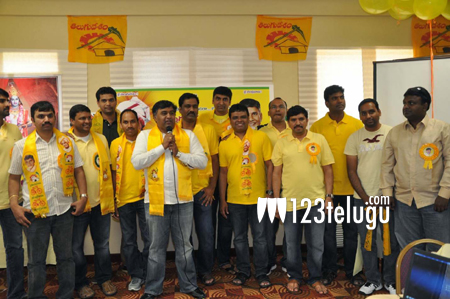 The banquet hall was well decorated and adorned with NTR’s and Chandrababu’s pictures and TDP flags made the hall so vibrant and lively. The event started off with National Integrity songs coordinated by Mrs. Srilakshmi Kulakarni who also did MC. A special documentary ‘Sarileru Neekevvaru’ on the life history of TDP Founder, Legend Late NTR, later followed by another nice documentary on current TDP President, Mr. Chandra Babu Naidu.

Harrisburg NRI TDP Team pledged 1 lakh donation for AP Capital development fund and paid rich tributes to TDP Leaders & cadre who sacrificed their lives for the party. Attendees remembered their services to the TDP and observed silence for a minute, all audience standing, as a mark of respect to the memory of departed souls.