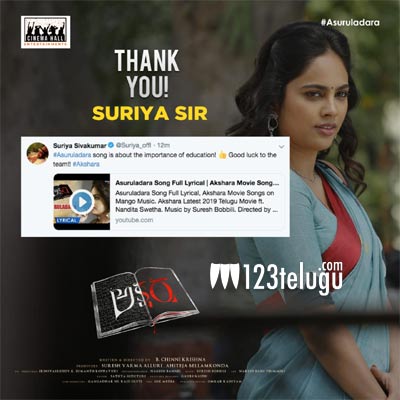 This evening, star Tamil hero Suriya pleasantly thrilled the team of the upcoming Telugu emotional drama, Akshara. Suriya took to Twitter and tweeted a link to the ‘Asuruladara’ song from Akshara and said that the song talks about the importance of education.

Bengaluru actress Nandita Sweta is essaying the central character in Akshara. The film is being directed by Chinni Krishna and produced by Ahiteja and Suresh Varma. Popular young singer Anurag Kulkarni has sung the Asuruladara song, which is composed by Suresh Bobbili.