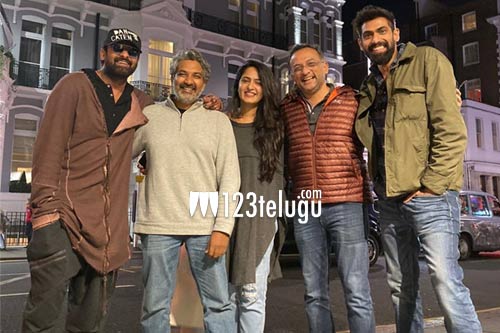 Led by Rajamouli, team Baahubali took Indian Cinema to the global level with the historic success of the 2-part franchise. After more than 2 years since the release of Baahubali 2, team Baahubali has had a memorable reunion last night ine London.

Seen in this picture are Bahubali director Rajamouli, producer Shobu Yarlagadda, and the lead cast Prabhas, Anushka and Rana Daggubati. They regrouped for Baahubali The Beginning’s special screening at London’s prestigious Royal Albert Hall, where the film was screened with a live symphony orchestra performing the soundtrack.