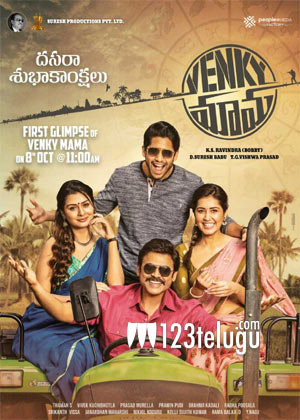 The makers of Victory Venkatesh and Naga Chaitanya’s upcoming multi-starrer, Venky Mama, are all set to unveil the film’s first glimpse tomorrow as a Dasara special treat. Fans are expecting a wholesome family treat from the Daggubati-Akkineni uncle-nephew duo.

Meanwhile, the unit is currently canning a lavish and colorful family song at the Ramoji Film City. A grand set has been erected for the purpose and all the lead actors are taking part in the shoot. A major portion of the film will be wrapped up with the latest schedule.

Venky Mama also features Raashi Khanna and Payal Rajput as the female leads. Bobby is directing the movie and Suresh Productions and People Media Factory banners are jointly producing it. Thaman is composing the music. The makers are yet to come up with an official announcement of the release date.