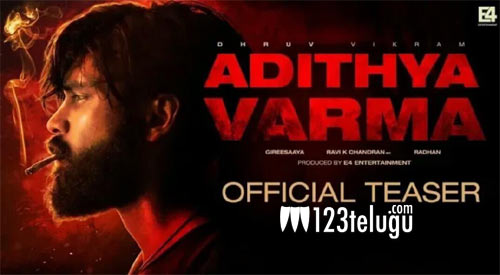 Last year, the teaser for Varmaa, the Tamil remake of the blockbuster Telugu romantic drama Arjun Reddy, was released to an underwhelming response from all quarters. Critics heavily panned teaser and even fans were highly disappointed.

But this morning, the makers of Adithya Varma, Arjun Reddy’s latest Tamil version, unveiled the film’s teaser. Chiyaan Vikram’s son Dhruv Vikram, who reprises Vijay Deverakonda’s role in the Tamil version, has impressed with his angry young man attitude this time around.

Adithya Varma’s teaser is faithful to it’s Telugu original, including the iconic background score that became a rage. The teaser has certainly raised expectations, and even Dhruv seems to be ready to score well with his intense performance.