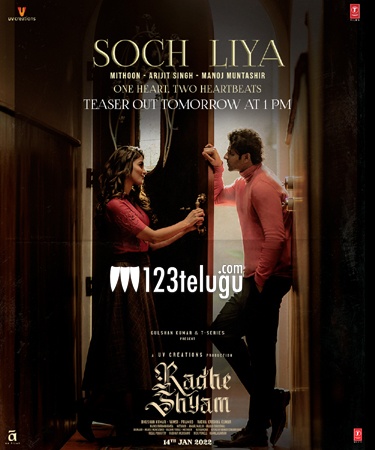 After the chartbuster Aashiqui Aa Gayi, the second single from the Hindi version of Prabhas and Pooja Hegde’s highly-anticipated period romantic drama, Radhe Shyam, will be released soon. The makers today announced that the teaser for the new single, titled Soch Liya, will be out tomorrow (Dec 6) at 1 PM.

Soch Liya has been crooned by Bollywood singing sensation Arjit Singh and composed by Mithoon. The lyrics have been penned by Manoj Muntashir. A special announcement poster has been unveiled to announce the teaser launch and it features Prabhas and Pooja caught in a romantic moment.

Directed by Radha Krishna Kumar, this pan-India multi-lingual film is being produced under UV Creations and T-Series banners, while Krishnam Raju’s Gopikrishna Movies banner is presenting it. The film is slated to open in cinemas worldwide on January 14.