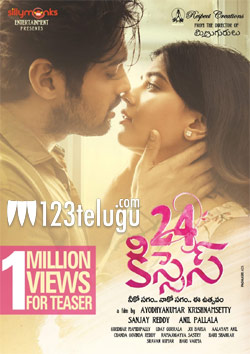 Hebah Patel is back after a long break with a film called 24 Kisses. The film’s promotional material has caught on quite well in the social media creating a good buzz for the film.

Apart from this, the teaser of the film has clocked the one million digital views in no time. What’s more interesting is that the teaser does not showcase any kisses and this has raised the curiosity levels as to why the film has been named 24 Kisses.

Minugurulu fame Ayodhya Kumar directs this film which has Adith Arun in a lead role. A new teaser of the film will be released soon.