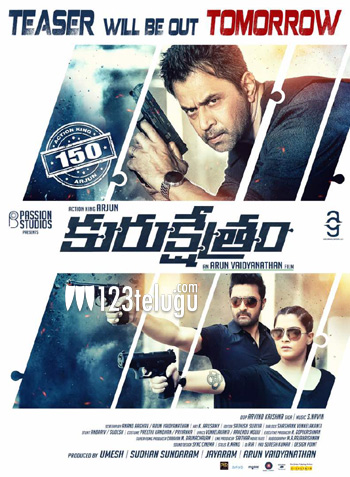 123telugu.com had earlier reported that senior hero Action King Arjun’s 150th film, Nibunan, is releasing in Telugu as Kurukshetram. In a never before feat, the film’s first look poster was unveiled by 150 celebrities a few weeks ago.

According to the latest update, Kurukshetram’s teaser will be released tomorrow. This high budget action thriller will see Arjun in a stylish cop’s avatar. Kurukshetram is slated for its release on July 7th.

Arun Vaidyanathan has directed this film, which also stars Prasanna, Varalaxmi Sarathkumar and Suman in prominent roles. Passion Studios is presenting the film.