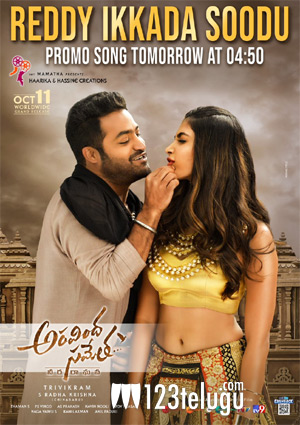 The album of Aravinda Sametha has all serious songs except for one peppy dance number called Reddy Ikkada Soodu. The teaser of this song will be out tomorrow and the news is that NTR has showcased some crazy dance moves for this number.

Pooja Hegde will sizzle with NTR in this song which has been composed by Thaman. Aravinda Sametha is releasing on a massive scale this Thursday and the above said mass number will please the fans who expect some good dances from their star hero.

Jani Master has composed this song which is supposed to come at a crucial stage in the film.