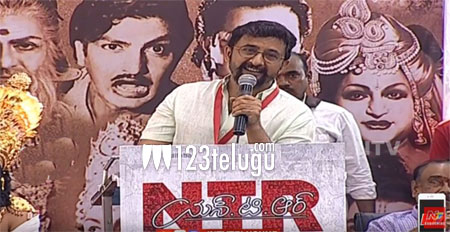 NTR, the highly-anticipated biopic on legendary Telugu actor and former Chief Minister of erstwhile Andhra Pradesh NT Ramarao, was launched in style this morning. Vice President of India M Venkaiah Naidu did the honors amid the presence of several celebrities from the film and political worlds.

NTR is being directed by Teja. Speaking at the event, Teja revealed that they are planning to wrap up the film as early as possible and release it during the Dussehra festive season later this year. Balakrishna will reprise his father NT Rama Rao in the movie.

Popular producer Sai Korrapati and Vishnu Induri will bankroll this film, along with Balakrishna. Veteran composer MM Keeravani will score music for this prestigious project and Ace Bollywood cinematographer Santosh Thundiyil will crank the camera. Stay tuned to 123Telugu for more exciting updates.