Telugu fans love me as much as my Tamil fans: Rajini at Darbar pre-release
Published on Jan 4, 2020 3:00 am IST 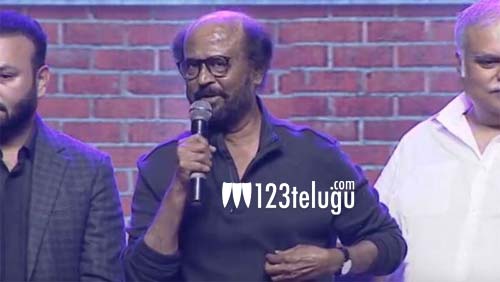 The pre-release event of the Telugu version of ‘Darbar’, Rajinikanth and AR Murugadoss’ highly-anticipated action thriller, was held in a star-studded manner in Hyderabad tonight. Thousands of fans gave a standing ovation and a non-stop rousing applause as Rajini took the mic to give his speech.

Speaking at the event, the Super Star said that his Telugu fans love him as much as his Tamil fans. Rajini then went on to express total confidence in the film’s success this Sankranthi season. “A subject like Darbar is not easy to make. The story treatment, the technical elements have given life. During the making of a film, some magic has to happen. Darbar felt like magic during the making stage. This will be a special film. I am confident that audience will surely love Darbar,” Rajini said.

Directed by AR Murugadoss, Darbar has Nayanthara playing the female lead. Rajini will be seen in dual avatars in the movie. The film is gearing up for a humongous release on January 9. Anirudh Ravichander has scored the music.