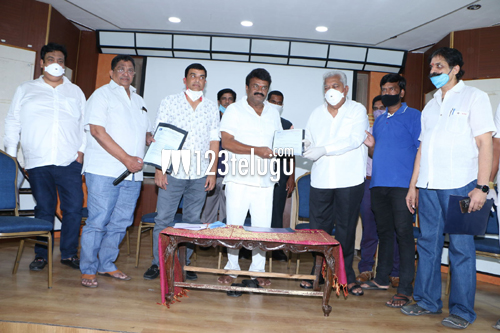 For the last 6 weeks, the entire Telugu film industry has been in a state of limbo due to the lockdown amid the Coronavirus outbreak. In this scenario, several key members of the Telugu Film Producers Council today presented a long list of requests to Telangana state Minister for Cinematography Talasani Srinivas Yadav.

As expected, the first and foremost request was to permission to resume the film shootings and post-production formalities as early as possible with a limited crew. In view of the huge losses incurred by the producers due to the lockdown, the TFPC has requested the government to suspend the collection of the GST for at least one year and waive off the electricity bills of movie theaters for the lockdown period.

Also, the TFPC has asked the Telangana government to implement the long pending demand of the single window system, permission to shoot in government parks and historical places free of charge, shooting in private houses without the mandatory police permission, permission to setup mini theaters to help small budget films and also to grant industry status to the Telugu film industry.

The TFPC has also urged the minister to grant the permission for the fifth (middle) show to screen low budget films and the compulsory screening of low budget films for 12 weeks in a year. Finally, permission for flexible ticket rates for high and middle budget movies and bringing in a system to enable transparency in the ticket sales were the key requests which have been submitted for the government’s scrutiny.