Telugu teaser of much-awaited spy thriller to be out tonight
Published on Jul 19, 2017 6:59 pm IST 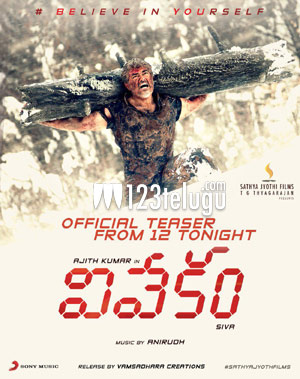 Tamil superstar Thala Ajith’s upcoming spy thriller, Vivegam, will be released in Telugu as Vivekam. The Tamil version’s teaser was released last month and it wiped out several records on social media. Now, the Telugu teaser of this much-awaited film will be unveiled at 12 am tonight.

Vivegam is slated for release on August 10. Souryam Siva has directed the film and Kajal Aggarwal is the leading lady in it. TG Thyagarajan has produced the movie on Sathya Jyothi Films banner and Anirudh Ravichander has scored the music. Vamsadhara Creations will be releasing the film in Telugu.