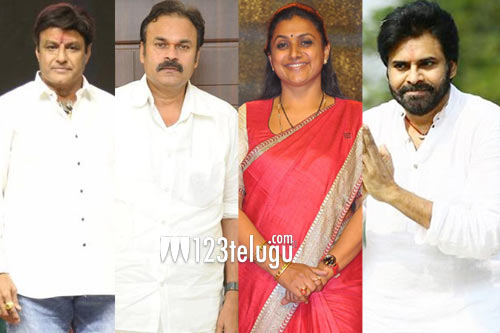 The AP elections are now over and everyone will be eagerly waiting for the results which will come out on the 23rd of May. But all eyes are on a few actors turned politicians like Balayya, Naga Babu, Roja, and Pawan.

Firstly, Balakrishna’s political power will be tested big time in Hindupur. Though he has great support in that area, he has not been in the best of form as his recent movies flopped badly and videos of him abusing his fans are coming out one after the other creating negativity.

Then, Roja is another actress who is contesting from Nagari. Though she won the first time, it will be interesting to see if she holds for the second time around. She has been in the news for all the wrong reasons and what will be her fate needs to be seen.

But out of all, Naga Babu is the man who will be watched carefully. This is the first time that he is contesting the Lok Sabha seat from Narsapuram.

He has the support of his mega fans but winning the Lok Sabha seat is no joke as many say that Naga Babu does not have much experience as a politician.

So, the destiny of these three along with biggie Pawan Kalyan lies in the hands of the people of AP. What will happen to them only time will tell.