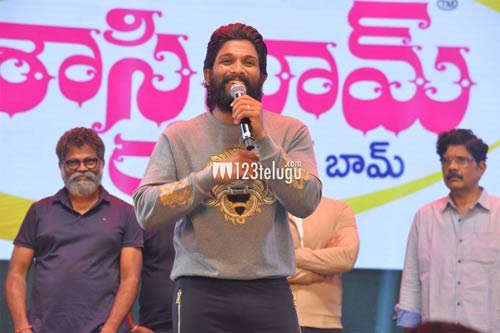 The highly-anticipated teaser for Allu Arjun’s Pushpa was launched in a grand event on the eve of the actor’s birthday last night. The teaser features a single dialogue by Allu Arjun ‘Thaggede Le’ and it’s going viral on social media.

During his speech at the event, Allu Arjun revealed that ‘Thaggede Le’ is something he often tells himself in real life. “Thaggede Le’ is a word the hero often uses in the movie, but I always say that to myself whenever I feel scared and insecure or experience failure,” said Allu Arjun.

Also starring Mollywood star Fahadh Faasil and Rashmika Mandanna in lead roles, Pushpa is being directed by Sukumar and produced under Mythri Movie Makers banner in association with Muttamsetty Media. The film has its soundtrack scored by Devi Sri Prasad.