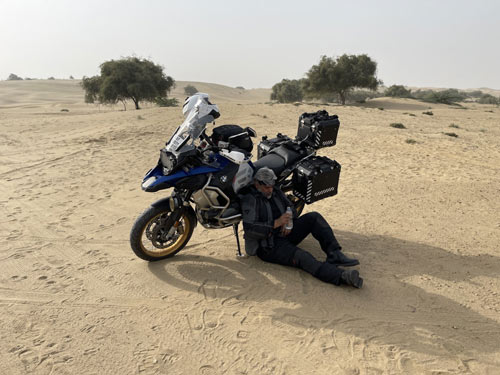 This candid picture of Kollywood star Thala Ajith from his ongoing all-India bike trip is winning the internet. Dressed in a biker’s uniform, Ajith looks uber cool in his trademark salt and pepper look. Ajith is seen leaning on his beastly BMW bike while driving water on the Thar Desert, Rajasthan.

It’s been nearly 2 weeks since Ajith has left Chennai on his bike. So far, he has toured across several exotic tourist spots in the North Indian states of Punjab, Gujarat, Uttar Pradesh and now Rajasthan. Ajith is expected to finish his trip and return to Chennai later this month.

The actor’s highly-anticipated action thriller, Valimai, is slated for release on January 14, 2022 as a Pongal festive treat.