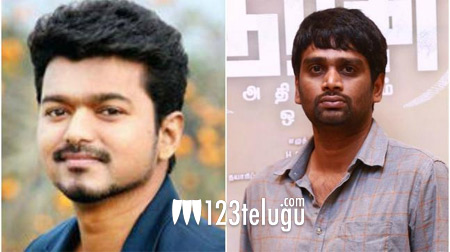 Tamil star Thalapathy Vijay recently kick-started his 62nd project in AR Murugadoss’ direction. Already, there has been a huge buzz on the star hero’s 63rd project. If the ongoing buzz is to be believed, Thalapathy63 will be helmed by talented young director H Vinoth, the director of Karthi’s hit action thriller, Khakee.

It was reported earlier that Vijay had personally called Vinoth and appreciated the young director after Khakee hit the screens last year. Tamil media circles are abuzz with the speculation of late that Vinoth is almost finalized for Thalapathy63.

Meanwhile, Jayam Mohan Raja of Thani Oruvan fame is also said to be a prime contender to direct his good friend Vijay’s 63rd project ever since he met the actor recently. Some clarity may emerge in the coming months.