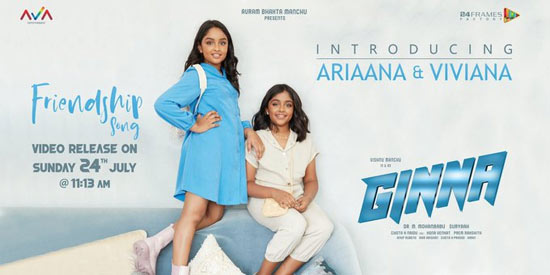 Tollywood actor Manchu Vishnu is currently shooting for his next film titled Ginna. Recently the film’s first look video was released which caught the attention of the audience. Sunny Leon and Payal Rajput are acting as female leads.

Now the actor took to his Twitter handle to announce that the first single will be released on Sunday 24th July at 11:13 AM. This will be a video song based on friendship. The interesting thing is Vishnu’s daughters Ariaana and Viviana gave their vocals to this song. A few days back we reported the same.

Directed by Suryaah, Vennela Kishore, Sunil and others are also a part of this movie. It is produced by AVA Entertainment & 24 Frames Factory. Anup Rubens is the composer of Ginna which is scheduled to release in Telugu, Hindi, Tamil, and Malayalam