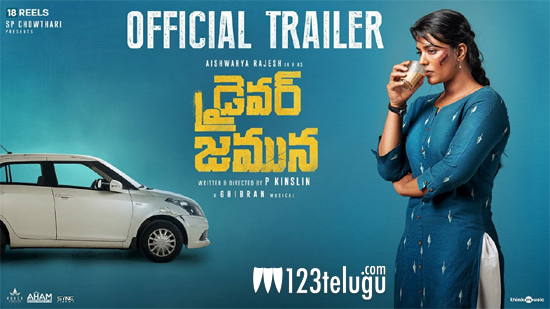 Actress Aishwarya Rajesh is last seen in the web show Suzhal which received a good response. She will be next seen in Driver Jamuna. Today, star producer Daggubati Suresh Babu released the film’s Telugu trailer digitally.

Going by the trailer, we see the actress playing a cab driver who gets stuck in a complex situation due to a few henchmen who hire her taxi. The story revolves around the 90-minute ride that happens between Nakkapalli to Rushikonda. The trailer is intriguing and interesting.

It is produced by SP Chowthari of 18 Reels and is directed by Kinslin. Driver Jamuna has Aadukalam Naren, Sri Ranjani, Abhishek, Rajesh, and others in crucial roles. Gokul Benoy cranks the camera, while the music is composed by Ghibran. This multilingual film’s release date is yet to be revealed by the team.