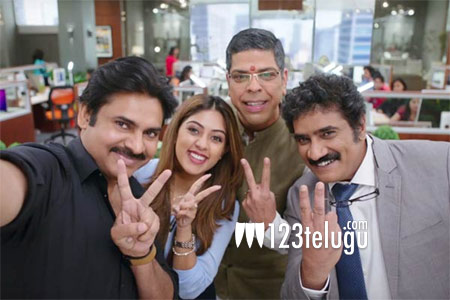 After being released at 6:30 pm yesterday, the most eagerly awaited teaser of Power Star Pawan Kalyan’s landmark silver jubilee film, Agnyaathavaasi, wreaked havoc on social media. The teaser became Tollywood’s most liked film teaser in all just 5 and a half hours, with over 311K likes until 12 am last night.

And it looks like there’s no stopping Agnyaathavaasi’s teaser. The teaser has already clocked over 5 million real-time views with more than 351K likes. Fans will surely take the teaser to the next level on Sunday.

Agnyathavasi is opening in cinemas on January 10 as a Sankranthi festive treat. This Trivikram directorial has young beauties Keerthy Suresh and Anu Emmanuel as the female leads. Anirudh Ravichander’s audio album will be unveiled on December 19. S Radhakrishna has produced the film.