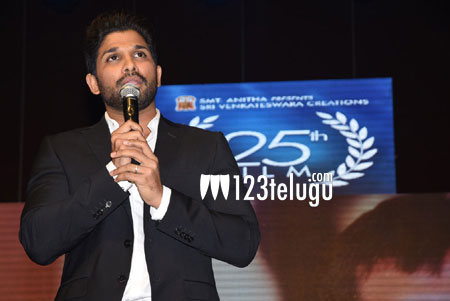 Allu Arjun’s Duvvada Jagannadham had a grand success meet function tonight. Speaking on this occasion, the Stylish Star thanked his fans, movie lovers and the entire team for making the film a huge hit.

Bunny also said that DJ’s success has once again proved that there are still a lot of good-hearted people and a lot of positivity left in this world. Bunny said that he will try to overshadow all the negativity with his positivity in the future.

Bunny specially thanked the film’s producer Dil Raju and expressed his happiness on getting a hat-trick of hits in Dil Raju’s banner. The Stylish Star concluded his speech by announcing that he will promote the film in the US soon.